Salmonella is a gram-negative bacterium. It can be transferred with dirty hands, contaminated food and water, feces and gastric contents (vomiting).

Products of animal origin are the most common source of epidemics, but that could also be pets and even cockroaches.

All those with poor immunity, especially children and the elderly, are vulnerable to the infection. It causes nausea, vomiting, cramping diarrhea. It is often accompanied by high temperatures. Ignoring symptoms and inadequate treatment can lead to severe body conditions. 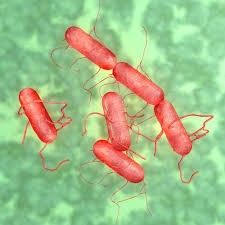 Enterobacter cloacae are gram-negative bacteria. They live in soil, water and some types of food.

The bacteria attack the digestive tract, the urinary tract, and sometimes the respiratory system. Most commonly attack the weaken immune system due to an infection or injury (wounds, cuts). If it is not treated, it can attack the heart valves and even the joints leading to some form of arthritis.

Enterobacter cloacae like to dwell on kitchen sponges, in sinks, dishwashers and plates for food grinding.

Pseudomonas aeruginosa is a gram-negative bacterium. It grows in soil, water, plants, animals.

In humans, a small number of Pseudomonas aeruginosa exists in the micro flora of the intestine and on the skin. It attacks when the immune system is weak, especially because of burns and wounds. It can cause eye, ear, respiratory tract infection, skin infection and even sepsis.

Proteus mirabillis is a gram-negative bacterium. In nature, it grows in water and dust, while in humans, it can be found in the digestive tract. However, due to immune system, it might move to the urinary tract and cause an infection. Also, it can cause pneumonia and the infection of blood vessels. It is most commonly used in combination with E. coli and bacteria that cause sexually transmitted diseases.

Staphylococcus aureus is a gram-positive bacterium. It is most frequently transmitted by touch. It lives on the skin, sometimes on the mucous membranes. Due to damage to the skin or mucous membranes, it can get into the tissue and cause local infection, but the lymph or blood can spread from all over the body and cause inflammation and sepsis.

It also lives on objects of general use, in milk, food products, where it often comes through human hands. Also, you could find them on the keyboard of the computer.

Enterococcus hirae are gram-positive bacteria. It belongs to the normal intestinal flora, however, in people with poor immunity, an infection may occur. This bacterium often causes hospital infections.

Klebsiella pneumoniae belong to the family Enterobacteriaceae. These are gram-negative bacteria. They attack the weakened immunity. They most often attack the respiratory system (leading to pneumonia, lung abscess ...), but it can spread from the mucous membranes that causes meningitis and septicemia. It can also cause urinary infections, and in children it causes enteritis and enterocolitis, which resemble dysentery.

Proteus hauseri is a  gram-negative bacteria. It lives in soil, water and food. They attack the weakened immunity. In humans, they are part of the microflora of the digestive tract. They cause urinary infections, meningitis and wound infections, and in particular intra-hospital infections such as: soft tissue infections, pneumonia, lung abscess, septicemia, etc.

Escherichia coli are bacteria that live in human and animal intestines. However, in people with weakened immunity, it multiplies and often comes to the urinary tract where it causes an infection. In addition, the cause is intestinal infections, meningitis, sepsis and inflammation of the lungs. The best prevention is hygiene! It is transmitted with dirty hands, sexually and even unwashed fruit and vegetables. Also, the sponge in the kitchen is the main litter of this bacterium. These bacteria do not choose gender or age, they attack everybody.

Listeria monocytogenes are bacteria usually found in soil, water, plants. They are part of the human and animal microflora, but due to weakened immunity and the ingestion of contaminated foods, they cause severe listeriosis. Since the bacteria are transmitted from mother to child, pregnant women are as much as 20 times more vulnerable to infection with listeria than other adults. The most common infections are caused by food, and they even occur epidemically. It can lead to sepsis, pneumonia and brain inflammation.

Micrococcus flavus is a gram-positive bacterium. It lives in soil, water, air and dust. They are present in foodstuffs, especially milk and yeast. In case of weakened immunity, it can cause infections. Since they grow in dust, they are most common in keyboards. 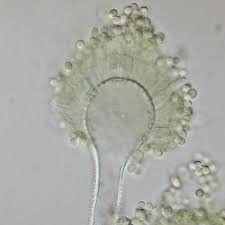 Aspergillus fumigates is a fungus. In nature, they grow in plants (opal foliage, cereal, hay, manure, etc.) and are often part of the saprophytic flora in the mouth. Spores of aspergillus enter the respiratory organs by inhalation. However, the disease does not always occur, but when the immune system is weakened. These fungi cause pulmonary aspergillosis and cause thrombosis. 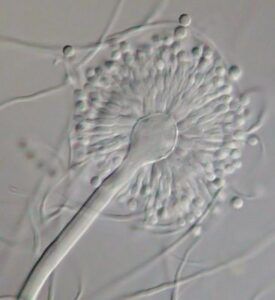 Aspergillus varsicolor is a fungus. They live in humid indoor environments and food products. They irritate the eyes, nose and throat. They cause onihomycosis (fungal infection of the nail). They are used in the industry because they remove plumb in water.

Aspergillus niger is a fungus. These fungi are caused by the disease "black mold" (contaminates fruits and vegetables, for example onions, peanuts, apricots and grapes). They are present in soil and indoor environments. They cause aspergillosis and otomycosis (fungal infection of the ears.)

Aspergillus niger is a fungus. These fungi are caused by the disease "black mold" (contaminates fruits and vegetables, for example onions, peanuts, apricots and grapes). They are present in soil and indoor environments. They cause aspergillosis and otomycosis (fungal infection of the ears.)

Penicillillium funculosum is a mycotoxin. It is a herbal pathogen that attacks cereals in other foods, especially in tropical areas due to climate (this fungus most often attacks pineapple). It lives in soil and on crop residues. It causes mycotoxicosis, and in the body of humans and animals comes through contaminated food.

Penicillium ochrochloron is a mycotoxin. It is a herbal pathogen that attacks cereals and other foods. It lives in soil and on crop residues. It causes mycotoxicosis, and in the body of humans and animals comes through contaminated food.

Candida albicans is a fungus that is found in the digestive tract of a man. Due to the poor immunity, it begins to multiply and move around the body where it attacks the skin, mucous membranes, nails and internal organs, especially reproductive organs.